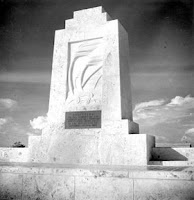 ISLAMORADA — Plans are in the works to spruce up Islamorada's only fixture on the National Register of Historic Places.

And with any luck, work on the grounds surrounding the 1935 Florida Keys Hurricane Memorial could begin by this summer, said Zully Hemeyer, the village's public works director.

A few details of the hurricane monument upgrade are still a moving target, but the basic design is in place. The plans do not call for any changes to the monument proper — even a proposed handicapped access ramp has been nixed by the state's historic review bureau, Hemeyer said.

But the patch of yard that separates the back of the monument from the adjacent Matecumbe United Methodist Church property will be transformed into a contemplative area, complete with benches, a historical story board and possibly, two collection pools.

A parking area, benches in front of the monument and new landscaping are also in store.

The main features of the landscaping changes, said Phyllis Mitchell, a member of the village's Landscape Advisory Committee, will be more native plants and less foliage density.

"We are getting the deepest purple bougainvillea that was ever created," she said.

Reducing density will improve site lines to the monument itself, said Rod Halenza, chair of the landscape committee.

"Our intent is to create a more inviting place so that people won't just stand at a distance and look at it, so people will walk up and realize what it is, that it actually is a tomb for a goodly number of people," Halenza said.

The hurricane monument, located between the Overseas Highway and the Old Highway near mile marker 82, was constructed out of coral rock in 1937. Entombed beneath the memorial are the ashes of more than 300 civilians and veterans who died in the Labor Day storm of two years earlier. Among them are numerous members of Islamorada's prominent founding families: the Russells, Pinders and Parkers, said local historian Irving Eyster.

Eyster said the historical story board to be placed in the planned contemplative area will be very simple. Its only text, he said, will be a list of all the people who are known to have perished during the storm. Officially, 423 people were killed by the Labor Day hurricane's estimated 150 to 200 mph winds and massive storm surge of approximately 17 feet. But Eyster says the actual death toll was likely between 500 and 600. Bodies were found as far away as Flamingo and Cape Sable on the Florida mainland.

Islamorada has budgeted $88,000 for the monument upgrade, all of it during the present fiscal year. Last June the landscape committee requested $100,000 for the project.

The tight budget, Hemeyer said, could mean the collection pools, one of which would feature a small waterfall, might have to be cut from the plan.

"Groups have to evaluate the cost of each element and the water features may be a significant expense," she said.

Hemeyer said she would like to present final plans to the Village Council by March.