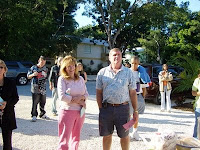 Two new homes have been built by Habitat for Humanity of The Upper Keys in the Largo Gardens neighborhood. These homes were dedicated November 16th. The two new partner families that will be living in the homes will be receiving 0% mortgages for the homes. The homes were sponsored by TIB Bank and KLI Supply.

You can find out more about Habitat for Humanity of the Uppers Keys by visiting their website at http://www.habitatupperkeys.org
at November 28, 2008 No comments:

Hurricane Ike serves as a reminder of how lucky we have been here in the Florida Keys.

A week after the eyes of the Florida Keys were all on Hurricane Ike, residents of the Florida Keys watched as Ike slammed into Texas this weekend. While we are all grateful that Ike spared us, our thoughts are with the people of Texas as they begin the arduous recovery after the storm passes. It has served as a reminder of how lucky we have been.

Since Thursday, travelers have been arriving by plane, cruise ship and motor vehicles as visitors drive down the scenic Overseas Highway from mainland Florida to begin vacations in Key Largo, Islamorada, Marathon, the Lower Keys and Key West.

The island chain was brushed by sustained tropical storm-force winds of 40 to 50 mph, according to meteorologists at the Key West National Weather service, when Ike’s center passed about 145 miles to the south-southwest of Key West. Hurricane-force winds remained well away from the Keys.

Buying a home requires plenty of homework (no pun intended). There are new concepts to grasp, unfamiliar terminology to learn, and plenty of decisions to make along the way.

The mortgage loan interest rate is one of the topics that confuse a lot of home buyers, especially the first-time buyers who are new to the process. So in this article, I'll explain how an interest rate gets applied to a home loan, and how it affects you as the borrower.

5 Things a Buyer Should Know

Clearly there is much more to learn about interest rates, as they apply to buying a house. But I hope the points I've made above give you a better understanding of this subject. I recommend you learn more about each of the items covered above, particularly the pros and cons of adjustable versus fixed mortgages. Being an educated consumer is the first step toward success in the real estate world.

About the Author: Brandon Cornett publishes a home buying blog that has offered house buying tips and advice since 2006. To learn more about this and related topics, visit the author's blog at http://www.homebuyinginstitute.com/homebuyingtips 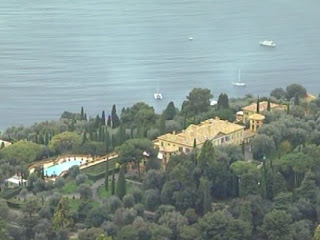 August 11, 2008 -- The market for the average priced U.S. residence may be soft, but the über rich (especially the Russians) continue to drive prices up at the very top of the world’s luxury market. Case in point -- Villa Léopolda, one of the most historic estates on the French Côte d'Azur, is now under contract by an anonymous Russian billionaire for $750 million (€500m). This three-quarters-of-a-billion dollar sales price sets a new record for the most expensive home sale in the world. The previous record was set earlier this year by Indian billionaire Lakshmi Mittal, with the reported purchase of a London home for his son for an estimated $236 million.

“While the French Villa is a fabulous property, this sale does put into perspective the value U.S. properties represent,” said Joy Martin, Broker and Owner of American Caribbean Real Estate in Islamorada and Marr Properties in Key Largo. “The most expensive residence on in the Upper Keys market is listed for just $9,245,000, and is exclusively marketed by American Caribbean Real Estate. It features 5 buildings on 6.78 acres on the Ocean.

Villa Léopolda, a cream-colored, turreted mansion with two guest houses, is midway between Monaco and Nice overlooking Cap Ferrat, near Villefranche-sur-Mer. The villa was originally built about 1902 by King Leopold II of Belgium. The grounds are regarded as among the most spectacular on the Côte d'Azur. Fifty full-time gardeners look after 20 acres of gardens and terraces, planted with 1,200 olive, orange, lemon and cypress trees.

The property’s new owner is said to be a Russian oil oligarch but not – despite initial rumors – Roman Abramovich, the highly visible owner of Chelsea Football Club, who already owns a €100m mansion near Antibes.

According to the Nice-Matin newspaper, a contract was signed last week to transfer ownership of the villa from Lily Safra, the widow of Edmond Safra, a murdered banking billionaire. Rumor has it that Mrs. Safra held out for months as the persistent mystery buyer kept raising his offering price. The paper also reported that 60 villas or mansions on Cap Ferrat are now owned by wealthy Russians.

The property has a unique history. In 1916, King Leopold’s nephew and heir, King Albert I, turned the villa into a hospital for officers wounded during the First World War. It later passed into the hands of the Agnelli family – Fiat automotive tycoons -- and became the scene in the 1960s for legendary jet-set parties attended by Frank Sinatra, Ronald Reagan (in his acting days) and other celebrities.

“This sale raises the bar and makes the half dozen or so $100 million U.S. properties on the market seem like bargains,” said Laurie Moore-Moore, Founder of The Institute for Luxury Home Marketing (www.LuxuryHomeMarketing.com), a US-based organization which trains real estate agents who work in the luxury market and awards the international Certified Luxury Home Marketing Specialist designation. “Today’s affluent are citizens of the world and the successful luxury agent must know how to reach them and what lifestyles they are seeking. It’s an exciting and active market for agents at the top.”

Marr Properties Inc. in Key Largo and American Caribbean Real Estate in Islamorada are both members of The Institute for Luxury Home Marketing and have received special training in assisting upper-tier buyers and sellers.

The crème de le crème in the Upper Keys 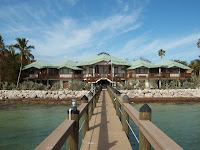 The Florida Keys is well-known for it’s spectacular ocean front estates overlooking the turquoise waters of the Atlantic Ocean and Florida Bay. Wondering what the top ten priced listings are in the Upper Keys? Here is a collection of the ten highest priced luxury single family homes in the Key Largo to Islamorada area, sure to dazzle even the most discriminating buyer.

How do the first two quarters of 2008 compare to the same time period in 2007? Here is a look at the numbers.