The Islamorada Chamber of Commerce will host an Oil Spill Town Hall Meeting as an informational platform for local businesses and residents.  The meeting will be held Tuesday June 22, at 6:00pm at Island Christian Church mm 83.4.  Participants will leave the meeting with concrete “how-to” information they will need to protect themselves, their businesses and our local marine mammals.

Email ThisBlogThis!Share to TwitterShare to FacebookShare to Pinterest
Labels: Islamorada 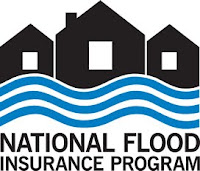 We are all eager to hear anything we can from Washington about the extension of the Flood Insurance Program (NFIP) but Congress is moving at a snail’s pace.  The NFIP extension is part of a much larger “extenders” package so there is plenty of controversy with various provisions.   The big problem right now is getting 60 votes on the extenders bill and Senate leaders are offering a third compromise as we speak in an effort to get those 60 votes necessary for passage.  We should probably not expect a Senate vote until Friday and then the bill will have to go back to the US House for a vote.  It is looking more and more likely that the House vote and then the President’s signature won’t come until early next week.  Very frustrating! In VERY good news, an amendment was added to the package to extend the First Time Homebuyer Tax Credit to those who were qualified and were under contract as of April 30th but haven’t been able to close yet (obviously many buyers are involved in short sales that are taking longer than expected and others can’t close because of the lapse in flood insurance).  With this Senate amendment the tax credit would be extended from June 30 to September 30, 2010 (but again, only for those who were under contract by April 30, 2010, not for new buyers entering the market today).
Publish Post
at June 17, 2010 No comments:

Foreclosures in the Florida Keys

Bank owned properties, also know as REO's have begun to appear across the nation and the Florida Keys have been no exception.

REO stands for Real Estate Owned and it refers to real estate property that was previously a security for a mortgage loan. The previous owner defaulted on the loan and the lending institution foreclosed on the owner and took ownership of the property.

Will Oil Spill in the Gulf Affect The Florida Keys?

All eyes are on Florida now as the oil spill that is still leaking from the Deepwater Horizon still floods into the waters of the Gulf of Mexico.

Parts of the oil may already being enterting the loop current, a warm ocean current in the Gulf of Mexico that flows northward between Cuba and the Yucatán peninsula, moves north into the Gulf of Mexico, loops west and south before exiting to the east through the Florida Straits.

Shoreline property owners and real estate professionals are concerned the disaster could literally hit home by decreasing house values. There is no way at this time to tell what the depreciation - if any - will be on the property values in the Florida Keys. Far too many variables play a role in predicting the coastline(s) that will be affected by the spill.

Most oil spill experts say any oil carried by the Loop Current would be more dispersed and highly weathered by the time it gets to the Keys, making it highly unlikely that large “rivers” of heavy oil would impact the Keys.  The weathered and diluted oil would likely appear in the form of tar balls. While arrival of oil in any form is unacceptable, tar balls are “significantly less toxic,” according to Florida Department of Environmental Protection Secretary Michael Sole. It is also possible that some areas of the Keys could be affected and others not, or that the oil residues could remain in the Loop Current and Gulf Stream and miss the Keys altogether.

The National Oceanic and Atmospheric Administration is providing oil slick trajectory maps regarding the oil spill and its proximity to the Florida Keys. Forecast maps are updated daily to plot and project approximate positions of the oil slick, and provide the latest available forecast showing movement in and around Gulf waters.  The map below was issued on Wednesday, June 2nd, 2010. 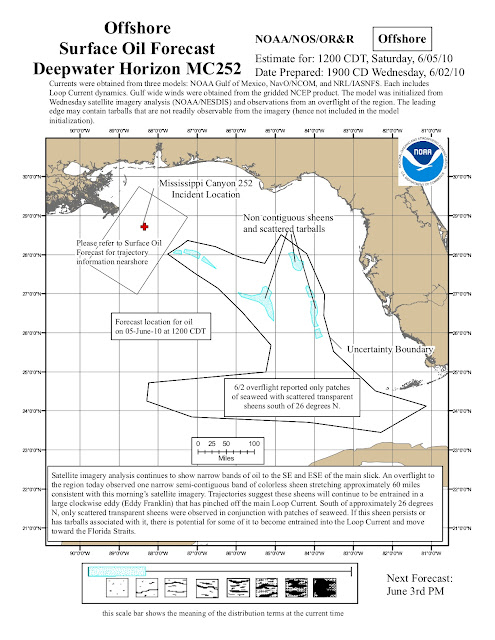