Signs of Stability - An article from the local Free Press

Home prices stabilize, while condos tumble
Agent: Association fees may be a drag
BY ROBERT SILK Free Press Staff
rsilk@keysnews.com
UPPER KEYS -- Local home sales kept pace during the second quarter of the year while prices stabilized. The condo market, in contrast, saw an increase in volume from April through June, but a precipitous decrease in price, according to Multiple Listing Service statistics prepared by Tracy Larson of Schwartz Property Sales. 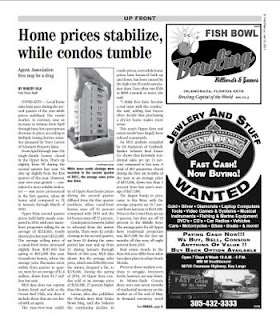 From April through June 102 single-family homes closed in the Upper Keys. That's up slightly from 98 during the second quarter last year. It's also up slightly from the first quarter of this year. However, year-over-year growth -- considered a more reliable indicator -- was more pronounced in the first quarter, when 98 home sold compared to 76 in January through March of 2010.

Upper Keys second quarter prices held fairly steady compared to 2010, with non-waterfront properties selling for an average of $254,000, nearly identical to last year's $253,000. The average selling price of a canal-front home increased slightly from $597,000 last spring to $613,000 this year. Oceanfront homes, where the average price fluctuates more widely from quarter to quarter, went for an average of $1.4 million, down from $1.7 million last year.

MLS data does not capture homes listed and sold at the Ocean Reef Club, nor does it include those that are not listed with an agent.

The year-over-year stability of Upper Keys home prices during the second quarter differed from the first quarter numbers, when canal-front homes were off 25 percent compared with 2010 and dry lot homes were off 27 percent.

Condo prices, however, failed to rebound from the winter months. There were 42 condo closings in the second quarter, up from 30 during the same period last year and up from 32 during January through March of this year, MLS data shows. But the average sales price, which was $280,000 over the winter, dropped a bit, to $278,000. During the spring of 2010, 30 Upper Keys condos sold at an average price of $354,000, 27 percent higher than this spring.

Larson, who also publishes the Florida Keys Real Estate News blog, said she believes the continuing decline in condo prices, even while home prices have bounced both up and down, has been caused by the high cost of condo association dues. Fees often run $500 to $600 a month or more, she said.
"I think fees have become a real issue with the condos," she said, adding that buyers often decide that purchasing a dry-lot home makes more sense.

An MLS analysis compiled by Ed Anderson of Coldwell, Banker Schmitt Real Estate Co. shows that Keyswide residential sales are up 13 percent compared to last year. A total of 862 properties closed during the first six months of the year at an average price of $472,000, down less than 1 percent from last year's average of $477,000.

The largest bump in price came in Key West, with the average property up 16.7 percent from last year, to $523.000. Prices in the Lower Keys are up 5 percent, but they are off 18 percent in the Middle Keys. The average price for all Upper Keys residential properties was $471,000 for the first six months off this year, off eight percent from 2010.

Real estate trends in the Keys this year differ from what has taken place in urban South Florida.
Prices in those markets continue to struggle. Inventory levels, however, are way down.

In Miami-Dade County there were just seven months of residential inventory on the market as of the end of May. In Broward inventory stood at less than six months - the threshold figure that analysts say is indicative of a healthy housing market.

Here in the Keys, residential inventory still sits at 18 months, down from 21 months after the first quarter. Inventory peaked at 56 months in the fourth quarter of 2007.

As a general rule, the Keys have more months of housing inventory up for sale than more traditional markets like Broward and Miami-Dade, where second homes make up a much smaller portion of the housing stock, said William Hardin, a real estate professor at Florida International University.

"If you're in the second home market and you don't need to sell, you may throw it on the market and see if it sticks," he said. "Otherwise, you'll keep using the house for vacations."

Markets in the Keys and Miami-Dade continue to be burdened by distressed sales, though the problem is worse on the mainland, where 57 percent of all residential closings in May were either short sales or bank-owned properties, according to the Miami Association of Realtors.

In the Keys, distressed sales have made up approximately 40 percent of closings this year, figures provided by Larson and Anderson show.