Hurricane Irene and the Florida Keys 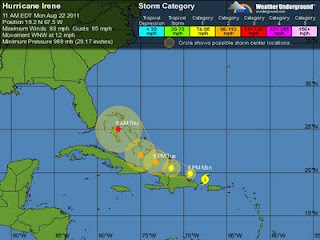 This time of year it's not unusual to watch the weather in the tropics.  Right now residents of the Keys are keeping a watchful eye on Hurricane Irene.

The 11 a.m. Monday (August 22) Hurricane Irene tracking map takes the Middle Keys, Lower Keys and Key West out of the four- and five-day tropical cyclone forecast track-error cone. The Upper Keys and most of the Florida peninsula remain in the cone.

If the current forecast track holds true, according to Jon Rizzo, warning coordinator for the Key West National Weather Service Office, no significant impacts are anticipated for the Keys