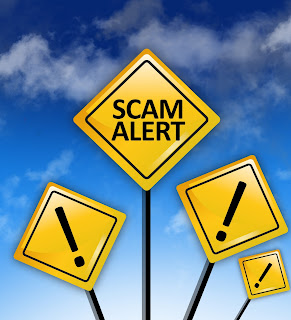 It started out as a regular new listing - with a long term tenant in place.  Sometimes the tenant would let me show the property, and sometimes he would not. Nothing unusual about that when working with a tenant that may not want his or her rental to be sold. There were always reasons why we couldn't show the property - too sick, too tired, have company in town, etc. for not allowing a showing.

The showings I was allowed to have went very well.  The home was always extremely well-kept and there was never any signs that anyone actually lived in the house.  No clothes in the closets, no food in the kitchen. Just a spotless, clean home. Odd, I thought.

Then the phone call came.

It was from a man named James, who had just paid for a vacation rental here in the Florida Keys.
He would be staying here the first week of March.  He was given the property address by the person that was claiming to be the property manager for the owner, and he decided to Google it to find out more about the home.  That's when he found that it was for sale and found my name and phone number. He called to ask a few questions about his upcoming stay.

I was confused. I knew the home was not a vacation rental since it had a long term tenant in place. I called the owner to ask if their long term tenant had moved out and if they were now doing vacation rentals in the home.  They didn't know what I was talking about. They said their tenant was still leasing the property and that the home did not allow for any short term rentals, per Monroe County code (which is correct - no rentals any shorter than 28 days are allowed in this home)

And yet, James told us he had found the home on VRBO, made an inquiry, booked and paid for his stay in March.  I went looking on VRBO and I also found the ad, advertising the home for vacation rentals as short as one day!

So I called the tenant and asked him who James was. He claimed that James was "a buddy" of his that would be house-sitting for a week in March.  I called and asked James if he really was a friend of the tenant and he responded with a no.

That's when it dawned on me - The long term tenant was indeed renting long-term from the owner and paying his rent each month.  However, unbeknownst  to the owner, he was operating the home as a vacation rental on VRBO as well as a few other sites.  He was making well more than double of what his monthly lease amount was!  None of this was ever disclosed to the owner of the property.

That's when it all started to add up. The spotless home, the lack of personal items, the lock box he had on the door - all signs that no one lived in the house full-time. The showings that were denied were probably denied because there was an active vacation rental at the home, so no showings.

When confronted, the tenant hemmed and hawed, but finally confessed that he was using the property for illegal vacation rentals - against county code that prohibits them.  The eviction process was swift and no more rentals will be allowed in the home. The owners are looking for another long-term tenant.

Despite this, the property is still being advertised on VRBO.  According to the calendar posted online, there are several vacation rentals coming up. I don't know if those vacationers have been contacted or not. James, the first vacationer who called about his upcoming vacation, has asked for a refund but has not yet received one. The so called tenant also has other properties in the Keys he advertises  as vacation renters.  I'm not positive, but I would be willing to bet those owners don't know what is being conducted at their homes.

When it comes to leasing your home, you can't be too careful.  When in doubt, leave it to a professional who will be sure that the rental is conducted properly. Yes, you may have to pay a fee for them to find you a tenant, but it is well worth it.

As always, use caution when booking a home for a vacation rental for your vacations. VRBO and AirBnB, among others, are quite popular sites for vacation rentals and both do have legitimate vacation rentals for rent. Still, do your homework and ask questions.  A little effort can save you from being the victim of a scam.