The Real Estate Market After the Storm 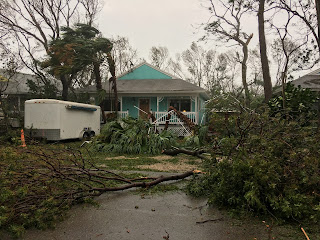 In the short three weeks since Hurricane Irma visited the Florida Keys, life is already beginning to return to "normal" for many in the area. Stores are open, schools are back in session, and the cleanup crews are working tirelessly to clean up our island home.

But what effect will the storm have on the real estate market?

Some believe the images of high winds, ocean surge and damage to homes, boats and landscaping being broadcast on television and social media sites may make buyers hesitant to purchase in a hurricane prone area. When looking at these images, it is important to remember that those are the images the media want you to see. They want you to see damage. They want you to see distraught people. What they don't show are the many areas of the Keys that are still fine. They won't show the undamaged homes or the relieved locals that suffered little damage because those images don't sell newspapers or news magazines.

Costs to purchase, such as insurance, may have a factor in how the market does. Insurance costs may rise, which will add to the cost of owning a home here. Most condominiums will have special assessments to cover costs of cleaning up common areas within the complex.

There are also plenty of people who are rethinking the decision to live in the Keys, and these people may be putting homes on the market in an effort to leave the area. Reasons people are considering leaving are the already high costs of living here, which are bound to become higher and the uncertainty of when the next storm will come.

Still, there are buyers that were under contract to close prior to the storm and many of those buyers are still going to close on the property, particularly in areas that were not hit as hard as others, such as the Upper Keys.

What I've been seeing in the MLS is a lot of properties are being taken off the market, either temporarily or permanently. I expect many of them will come back on the market after repairs have been made and landscaping is back in place.  What I'm not seeing is a lot of new listings coming on the market.

I believe Irma  created a fresh awareness of hurricane protection. Such as the desire to have impact windows, hip roofs, better drainage, the age of the roof ect. Also higher risk factors will be noticed more and we may lose some buyers with higher wind risk. We may also see an avoidance of wood frame homes due to the fear of them being weaker in storms, accurate or not fear is a strong factor. Many of the old majestic homes in Key West are wood frame and have weathered many storms and are still standing strong.

The fact is, people love to come here for the weather (most of the time), the fish and the diving.   The desirability of that will not decrease.  And my personal opinion is that the Florida Keys will remain more attractive even though hurricanes will still pass through from time to time.